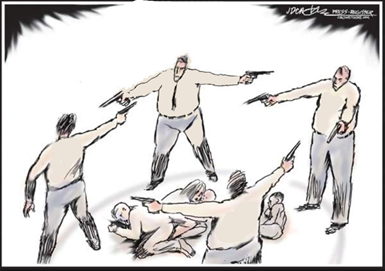 We frequently get a question that has no good answer. “If an incident happens at our church what should we do about all the concealed carry people pulling out their guns?”

In the latest news we see churches encouraging everyone in the congregation to bring their guns to church. In Texas, we passed a new law exempting churches from any sort of training to form armed security teams.

I had a conversation with a gentleman that really opened my eyes to an avenue of thought I never saw coming. He said he goes to a church that is half liberal (anti-gunners) and half conservation (pro-gunners). His statements took me by surprise. He said the liberals were rejoicing about the new laws! Huhh? He said they can’t wait for an incident where a concealed carry person with no formal training in professional security pulls out his gun and kills somebody.

Here is an article where it actually happened –

Remember the story we covered earlier in the week of the man shot to death in a Pennsylvania church service?

The shooter has now been charged with voluntary manslaughter and reckless endangerment for his idiotic actions.

The Montgomery County District Attorney’s Office says a man displayed a badge he purchased online to a fellow church member prior to shooting him to death during Sunday morning service.

Twenty-seven-year-old Robert Braxton III of Montgomeryville was killed during a service Sunday at Keystone Fellowship Church on the 400 block of Stump Road in Montgomeryville.

“Braxton was creating a disturbance during the 11 a.m. church service after a fellow church member sitting behind him touched his shoulder, apparently telling him that he’d taken an already occupied seat,” Steele said.

Witnesses say they saw church ushers and an associate pastor intervene and talk to Braxton. They then left with him remaining in the seat.

“Witnesses then saw the victim calming down and saw the shooter come over. When he came over he had a gun out,” Steele said.

Storms, who authorities say has no official function with the church or any history of law enforcement, approached Braxton and displayed a Concealed Weapons Permit badge. He then told Braxton he had to leave the sanctuary.

“The badge that defendant showed the victim was a permit to carry a concealed weapon that he seemingly purchased online,” Steele said.

Authorities say Braxton took a swing at Storms, punching him in the jaw.

This was a minor dispute about pew seating, and one that already resolved. Storms had no business interjecting himself into the situation, but had his fake badge and very real gun, and an apparent urge to pretend to be somebody important.

He was going to through his imagined authority around.

Braxton, apparently seeing the gun and recognizing it as a lethal force threat, took an understandable (if ill-advised) swing at Storms, but failed to put the fake badge carrying bully out of commission.

Storms then claimed he felt that lives were at risk—because of the situation he created—and shot Braxton to death. It’s minor miracle that he didn’t managed to hit anyone else.

Robert Braxton (center) was shot and killed Sunday in North Wales, Pennsylvania by a concealed carrier posing as an authority figure with a badge he bought online.

Mark Storms appears to be the kind of petty, arrogant vigilante that gun control cultists imagine us all to be. He’s the worst possible example of a concealed carrier.

Your concealed handgun is there to protect you and anyone you assume the responsibility of protecting from lethal force threats. That’s it. It does not give you legal authority of any other kind.

Mark Storms wanted to be somebody important.

Well, he certainly has the attention of the real authorities now.

Q: How DO you tell the good guys from the bad?

Common Answer: We know all our people, so it must be the person we don’t know.

Q: Has Terry gone off his rocker?

Answer: In 2005 Terry Ratzman killed seven people who he had been worshiping with for years.

Terry Michael Ratzmann (1960 – March 12, 2005) was an American mass murderer who killed seven members of his Church congregation, the Living Church of God (LCG), before committing suicide at a Sheraton Hotel in Brookfield, Wisconsin in 2005.

Our conclusion: Probably the best a church can do is –