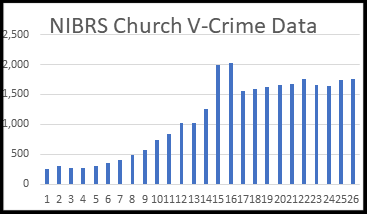 NOCSSM's president, Chuck Chadwick, said "Since 2009, one of our ongoing research projects is to analyze data from various databases. One database of particular interest is the FBI's ICPSR National Incident-Based Reporting System (NIBRS) ucr.fbi.gov/nibrs-overview, which contains summary reports and databases of individual crime incidents reported to the FBI. There have been other studies based on internet articles, but this study used actual FBI reports. This is the very first time anyone has actually studied church crime scientifically."

The study was undertaken in the effort to use verified quantitative data to research the rate of church crimes in the U.S. It is the first such analysis of Church violent crimes derived from the FBI's National Incident-Based Reporting System (NIBRS). The study covers the years 1991-2016 and focuses on crimes of a violent or forceful nature against persons. The results are derived from research conducted on actual FBI data and not internet searches or news articles.

V-Crimes - Data collection models differ in how they collect their data and which data they choose to count as what type of crime. This study focuses on crimes of force or violence against persons. V-Crimes include those crimes against persons coded as: Aggravated Assault, Assault, Murder/Nonnegligent Manslaughter, Negligent Manslaughter, Kidnaping/Abduction, Robbery, Forcible Rape, Forcible Sodomy, Sexual Assault with an Object, Forcible Fondling.

Violent Church incidents have always happened at a steady percentage of all national and all church incidents and have not grown substantially over the 26 years of the study.

The available quantitative data supports the hypothesis that it is the amount of media/press coverage and the growth of technology that has generated a sense of accelerated growth in church crime.

NOCSSM looks forward to publishing other data from the study soon.

For further details go to www.NOCSSM.org.